Faith is just this paradox, that the single individual as the particular is higher than the universal …
Kierkegaard, ‘Fear and Tremling’

Many of the themes that were later to become associated with existentialism, as a philosophical trajectory, were either prefigured or initiated in the work of Søren Kierkegaard (1813 – 55). The absurd, the particularity of the individual situation, the limitation of reason, and even ‘nothingness’ may all be drawn out of his work.

Kierkegaard’s ‘teleological suspension of the ethical’ (i.e., there may be ends that transcend ethics) arises out of his consideration of the story of Abraham and Isaac in which Abraham has faith that God will preserve Isaac even though there is no way that he can know this. Faith is thus taken as something not only beyond reason, but beyond belief – there is no ground to faith, which is why it is taken as a leap into the void. However, this leap does not occur without resignation, despair, and fear of extinction. 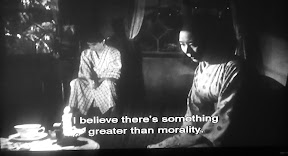 there’s something greater than morality 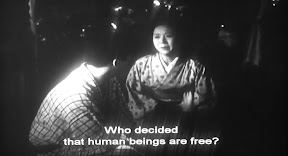 Who decided that human beings are free?